CERN history
The historical milestones in 60 years of science 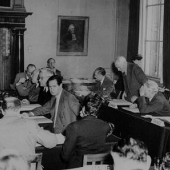 At the end of the Second World War, European science was no longer world-class. Following the example of international organisations, a handful of visionary scientists imagined creating a European atomic physics laboratory. Raoul Dautry, Pierre Auger and Lew Kowarski in France, Edoardo Amaldi in Italy and Niels Bohr in Denmark were among these pioneers. Such a laboratory would not only unite European scientists but also allow them to share the increasing costs of nuclear physics facilities.

French physicist Louis de Broglie put forward the first official proposal for the creation of a European laboratory at the European Cultural Conference which opened in Lausanne on 9 December 1949. A further push came at the fifth UNESCO General Conference, held in Florence in June 1950, where American physicist and Nobel laureate Isidor Rabi tabled a resolution authorising UNESCO to "assist and encourage the formation of regional research laboratories in order to increase international scientific collaboration…"

At an intergovernmental meeting of UNESCO in Paris in December 1951, the first resolution concerning the establishment of a European Council for Nuclear Research was adopted. Two months later, 11 countries signed an agreement establishing the provisional Council – the acronym CERN was born. 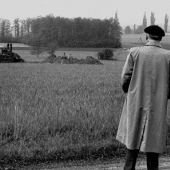 Geneva was selected as the site for the CERN Laboratory at the third session of the provisional Council in 1952. This choice was approved in a referendum held in the canton of Geneva in June 1953 by 16539 votes to 7332. On 17 May 1954, the first shovel-load of earth was dug on the Meyrin site watched by Geneva officials and members of the CERN staff. 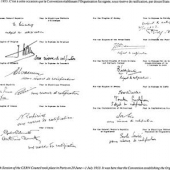 The European Organization for Nuclear Research officially comes into being

On 29 September 1954, following ratification by France and Germany, the European Organization for Nuclear Research officially came into being. The provisional CERN was dissolved but the acronym remained. 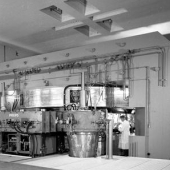 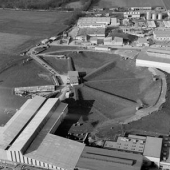 The Proton Synchrotron (PS) starts up

The first of CERN’s big machines, the Proton Synchrotron (PS), started up in November 1959. Today, the PS is still the heart of CERN’s unique accelerator complex. 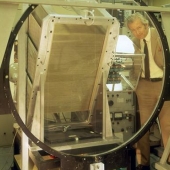 Georges Charpak invented the multiwire proportional chamber. Conceived to measure particles, it has revolutionized particle physics and found many other applications. Charpak received the Nobel Prize for his invention in 1992. 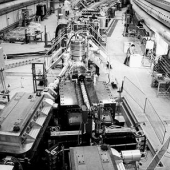 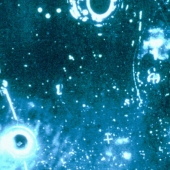 The discovery of neutral currents

The discovery of neutral currents by the Gargamelle experiment brought evidence for the electroweak theory. By explaining two fundamental forces of Nature in a single framework, this theory constitutes an important step in our understanding of nature.

The Super Proton Synchrotron (SPS), 7 kilometres in circumference, came into service in May 1976. Supplying beams to a huge variety of experiments, the SPS later became the world’s first proton–antiproton collider.

Discovery of the W and Z particles

CERN experiments discover the W and Z particles – carriers of the weak interaction in January 1983. This discovery underlines the observation by Gargamelle, and leads to a Nobel Prize for Carlo Rubbia and Simon van der Meer in 1984. 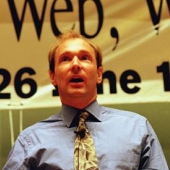 Tim Berners-Lee presented his blueprint for the World Wide Web under the innocuous title “Information Management: A proposal”.  The first web server was up and running by the end of 1990 and three years later CERN made the software available on a royalty-free basis. 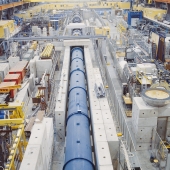 The NA31experiment announced precise results on a phenomenon known as CP violation, indicating a tiny difference between matter and antimatter. 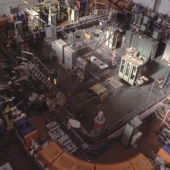 The first antihydrogen atoms were created at the PS210 experiment using a beam from the Low Energy Antiproton Ring (LEAR). 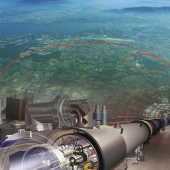 Construction of the Large Hadron Collider (LHC) began in 1999. The most complex scientific instrument ever built, it was to occupy the 27-kilometre LEP tunnel after LEP shut down in 2000.

The ATHENA and ATRAP experiments at the Antiproton Decelerator produced thousands of ‘cold’ antihydrogen atoms allowing a first glimpse inside antimatter. 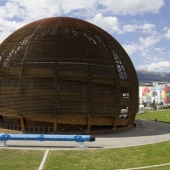 Inauguration of the Globe of Science and Innovation

The Globe of Science and Innovation - a gift from the Swiss confederation - is inaugurated on 19 October as part of CERN's official 50th anniversary celebrations. Today, the Globe hosts a permanent exhibition: Universe of Particles.

The LHC circulates its first beam

At 10.28 a.m. on 10 September 2008 a beam of protons was successfully steered around the 27-kilometre Large Hadron Collider (LHC) for the first time. 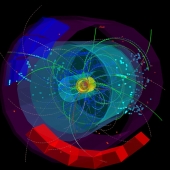 The LHC produced its first high-energy collisions in March 2010, allowing the exploration of physics to begin at a new frontier. 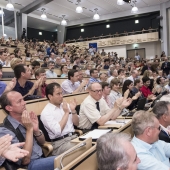 ATLAS and CMS observe particle consistent with the Higgs boson

At CERN on 4 July, the ATLAS and CMS collaborations presented evidence in the LHC data for a particle consistent with a Higgs boson, the particle linked to the mechanism proposed in the 1960s to give mass to the W, Z and other particles.

Further analysis confirmed that the new particle is a Higgs boson, leading to the award of the Nobel Prize in Physics to François Englert and Peter Higgs for proposing the mechanism giving mass to elementary particles. 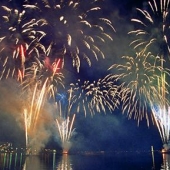 To celebrate its anniversary, CERN and its Member States have put together a rich and attractive programme offering something for everyone: public lectures, guided tours, practical demonstrations and exhibitions inspired by science.